In July of 2012, we decided to "adopt" another Boston. The family we got him from was unable to keep him when they moved to Texas. He turned 5 months old the day after we got him. He's been a great addition to our family! 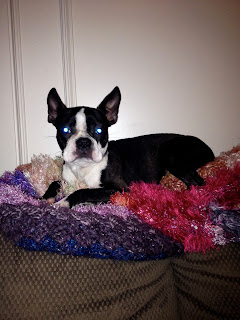 At first, we were a little concerned about how Rueger would react to the situation, but he adapted really well. Rueger was our only fur baby for about a year and half, so I wasn't sure that he was going to like sharing Momma and Daddy's attention. It took about a month until he fully adjusted. Now, they are best buds and I can't imagine what it would be like if we had to separate them.

Similar to my introduction on Rueger, I'm going to post some fun facts about Achilles.

1. He loves to chew! {This might be an understatement.} We've had a couple of destroyed things in our home, but we've learned that is ONLY okay to chew on our toys.
2. He loves to snuggle and burrow. If he's sleeping, he prefers to be touching someone or trying to burrow behind/under them.
3. He thinks he's tough and a guard dog. He barks at strangers and foreign noises outside.
4. He loves to ride in the car.
5. When he's ready for bed, it's best to leave him alone because he gets cranky.
6. He's protective of Rueger and doesn't like other dogs to play with Rueger. (This can be cute and endearing, but it's something we are working at lessening.)
7. Achilles follows Rueger's lead - he's learned sit, stay, and up by watching Rueger.
8. Adam belongs to him! He definitely thinks Adam is his human.
9. He is a jumper! He can jump high. When he gets excited, he's like a spring - he bounces repeatedly.
10. Most importantly, he seems to love being a Greer!

Until next time,
XOXO Amanda
Posted by Amanda at 8:16 PM No comments:

Adam and I made a trip to Ennis, TX this weekend to picnic and look at the Bluebonnets of Texas. Oh, and of course we took Rueger with us! :)

There are a few bluebonnets here and there in the DFW area on the side of highways, but we wanted to see them in their full glory.

We started out at Bluebonnet park and had a picnic. At the park, you can get in the bluebonnets to take pictures and look around. We most definitely took pictures (anyone who knows me, knows this was a must)! After our picnic and pictures, we made our way to the other side of Ennis to drive the Bluebonnet trails.

There is a map online that says the trails can take up to 2 hours. We decided not to do the whole trail, but we still got to see a bunch of beautiful bluebonnets.

Before we went, I thought Rueger might have liked to play in the bluebonnets. He was happy to be with us, but was indifferent to the flowers. ;) He was more interested in the other people there to look. He is such a people-lover!

Here are some of our pictures from the trip! 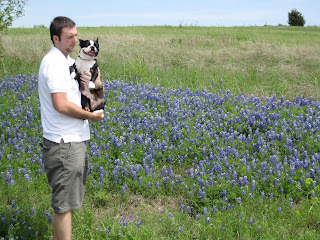 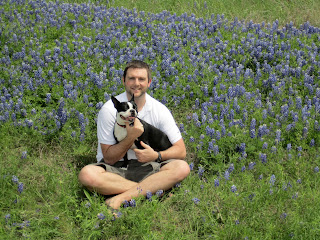 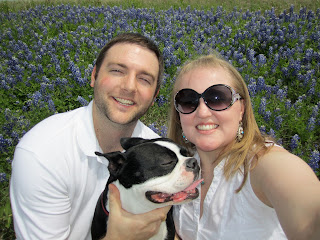 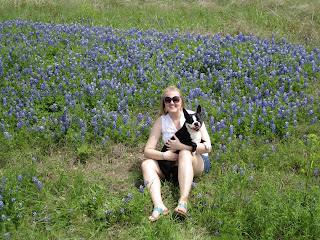 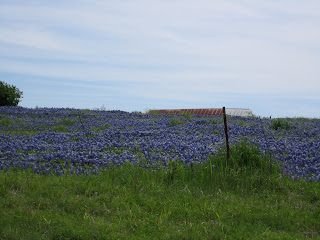 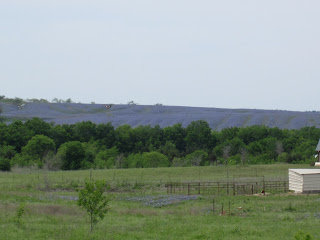 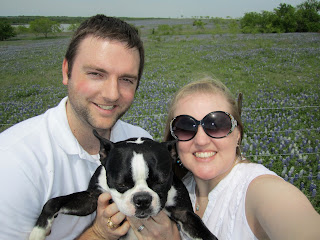 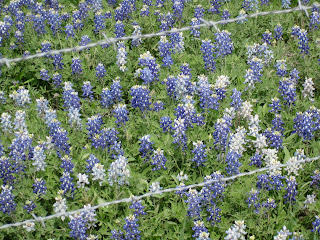 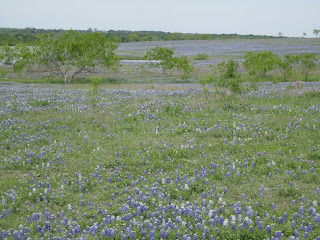 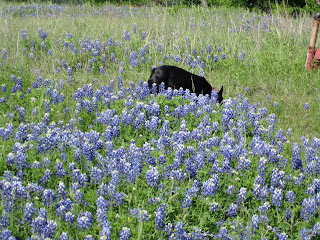 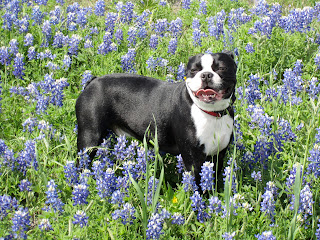 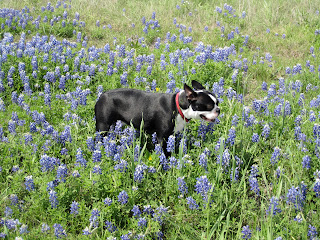 Today, I am thankful for beautiful weather on this Thanksgiving day. I'm also thankful to have a home where I can host Thanksgiving for my family and others. Happy Thanksgiving to you and yours!


Until next time,
XOXO Amanda
Posted by Amanda at 10:30 AM No comments:

I didn't do a post yesterday. Shameful, I know. I've been prepping for Thanksgiving the past 2 days. And it's finally here! :) I wanted to make up my post for yesterday and then I will do my post for today (Thanksgiving).

I made all of the dishes for Thanksgiving (except for the turkey, stuffing, and gravy) ahead of time. I figured it would be easier and make today more relaxing. Boy, was I right! I'm so glad I did. I didn't even have to do much today. My hubby made the turkey and stuffing. :) He's so sweet and helpful. All I have left to do is heat the sides and make some gravy. Woo hoo!

Anyway, let's get to the giving of thanks. Yesterday, I was thankful for family traditions. One of the dishes I made is my Gran's famous asparagus casserole. This is the first time I've ever made it, so I called her last night to make sure I had all the details right. She was really excited I was going to make it and that made me happy. She has been making it for Thanksgiving, and sometimes Christmas, since the 1950s. :) It's a family favorite and I'm thankful to continue the tradition.
Posted by Amanda at 10:22 AM No comments:

Get On Your Feet

Today, I am thankful for my GelPro Chef's Mat. It was a birthday gift from my Mom. I know I've mentioned it before, but I love to cook. This mat is a life saver. It relieves some of the pressure on my feet while I'm cooking/washing dishes. We have a smaller kitchen now, so one mat works fine, but in the future I plan on having a mat for every area in the kitchen where I stand for lengthy periods of time. Right now I just move it around to where I need it.

I spent all day cooking and preparing for Thanksgiving. Today I made: 1 pumpkin pie, 3 pecan pies, 1 batch (10) of Rueger treats, pizza rolls (for our dinner tonight - I will post about these later), mashed potatoes (from scratch), and 3 dozen pumpkin chocolate chip cookies. I was in the kitchen and on my feet, pretty much all day. The mat was my friend. My feet are a little tender, but I know I would be in a lot more pain if I hadn't of had my cushiony mat to stand on. :) Seriously, I cannot go on enough about it or describe how truly beneficial it is.

This was my first time making pumpkin pie, Rueger treats, pizza rolls (a Pinterest recipe), mashed potatoes (5 lbs from scratch), and pumpkin chocolate chip cookies. I really enjoyed all of the cooking/baking I did today, and will post more about the recipes and how everything turned out later.

Again, thank you to my Mom for getting me a GelPro mat. It has been a wonderful gift.
Posted by Amanda at 11:03 PM No comments:

I forgot to do my thankful post yesterday. I know, it's unacceptable. Here's the deal. I spent all day researching recipes for Thanksgiving. See, the hubby and I will not be traveling to our hometown for Thanksgiving this year. It just isn't possible with his work schedule. I think I mentioned this in a previous post. We thought it was just going to be us, but a friend from college lives in the area and his son will be here. So, they are going to join us. The more the merrier!

Needless to say, I was excited to be able to cook for more people. When it was just going to be me and the hubs, we were just going to do a simple, yet traditional Thanksgiving dinner. Now that we have some guests coming, I made a feast - okay, not quite a feast, but a slightly bigger dinner.

After researching recipes all day (yesterday), I wanted to go to the store to get all of the things I need for Thanksgiving dinner. I didn't want to wait any longer and:
1. fight crowds of people
2. not be able to get what I needed because it was all gone.

So, I made a list of every thing I needed and was going to head to the store. My sweet hubby told me he didn't want me to go until later because it was storming, and if I would wait, he would go with me. :) So I waited, and we went together. It's not the thing I am thankful for today, but I am thankful he is always thinking of me and willing to help me with chores.

I am thankful that the hubby and I will be spending Thanksgiving together ( we were apart last year). I'm also thankful for the friends who will be joining us. It will be nice to have a "traditional" Thanksgiving!
Posted by Amanda at 9:53 PM No comments:

Today, I am thankful for rain. I love rain. The sound of it, smell of it, look of it. I love every thing about rain! It's so peaceful and relaxing to sit and watch the rain falling down.

It rained (okay, sprinkled) here today. While I enjoy the rain, my little Rueger doesn't much care for it. He won't even go outside to potty when it's raining. We have to hold an umbrella for him, and even then it's not always a go. Today, however, he went all the way to the back of the yard, in the rain, and did his business. I was so proud. :)

Until next time,
XOXO Amanda
Posted by Amanda at 9:32 PM 1 comment:

Amanda
Every love story is beautiful, but ours is my favorite.